I recently blogged about my thoughts on Dan Hurley's Diabetes Rising, a fantastic book about the history, present, and future of diabetes. The one thing I noticed was that he was somewhat noncommittal on whether he attributed type 2 diabetes to diet — he claims early on that it's not as simple as that, but later in the book, he does a great deal of talking about an area of the country with the highest incidence of the disease: the number of fast food restaurants there, the lack of health education, etc.

Anyway, one subject he talks about that I didn't mention in my last post about the book was obesity surgery as a cure for diabetes. There are two types of surgeries — one that makes the stomach smaller, and one that bypasses part of the intestines. He follows a guy who has both surgeries, and almost immediately the patient goes off his diabetes medications, which hadn't been working very well. It is a miracle cure for him.

Well, this obesity surgery has come into the news as a treatment for diabetes. Although Hurley writes about it very positively, I have mixed feelings. Sure, there are probably people who biologically need it in order to control their weight and their diabetes. But I also fear that type 2 diabetics who could be helped by diet and exercise, won't try to live healthier lifestyles, because it's so much easier just to get the surgery and be done with it. I also worry that people who haven't developed type 2 diabetes yet, but are perhaps prone to it, will not try as hard to watch their diet or stay active, because hey — what's the point? If their lifestyle starts to affect their health, they just have to get a quick surgery, and ta-da — all better!

What are your thoughts on the issue?
Posted by Katharine Swan at 12:21 PM No comments: 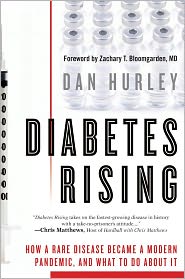 I recently read Diabetes Rising by Dan Hurley, a book that takes a harsh look at the rise in diabetes and what is (or isn't) being done about it. Most of us have heard that type 2 diabetes is on the rise, which we blame on the poor American diet. We also know that 9 out of 10 diabetics are type 2, which those of us with type 1 diabetes tend to think puts us in the clear. Ours is considered a genetic disease.

But Hurley turns that theory on its head in his book. First of all, he talks about how the incidence of type 1 diabetes is going up remarkably quickly. Some people would say that's because of medical advancements — e.g., we know what it is now, people can survive long enough to pass the genes on to their kids, etc. — but Hurley goes through a whole list of factors that have been shown in studies to increase the likelihood of someone developing type 1 diabetes.

For example, an increased chance of developing diabetes is linked to:

* Milk - Babies who are nursed for the first year are less likely to develop diabetes than babies who are fed formula. There is a theory that until a certain age (6 months? I can't remember what he said) our children's bodies are not made to digest any protein other than what is in our own breast milk, and feeding babies with formula — which is made from cow's milk — makes a child more likely to develop diabetes later on.

* Lack of sunlight/vitamin D - Diabetes rates are highest in the northeastern U.S. and northern countries where kids don't get a lot of exposure to the sun, and a study in Europe (Sweden? Finland? I can't remember where) showed that vitamin D supplements decreased the risk.

I think there were others, but these are the ones I remember offhand. Hurley also discussed one man's theory that type 1 and type 2 are not, in fact, different diseases — that type 2 is simply what people prone to diabetes develop when they don't get type 1. The chapter describes it better than I ever could, but basically, people who have type 2 also tend to have the antibodies that cause type 1 (autoimmune) diabetes, and people with type 1 also tend to have resistance to insulin. The thought is that, whatever the trigger is, if you develop diabetes early in life, it shows up as an autoimmune response, while later in life it shows up as insulin resistance.

Hurley also spends a great deal of time talking about scientific advancements for treating diabetes, versus advancements for curing diabetes. He points out that more of the effort is focused on treatments than cures, presumably because there is more money in treating it than in curing it. He also discusses non-biological cures, such as combining pump and CGM technology to create an artificial pancreas. The FDA won't approve such a device, because it claims that a human needs to be involved in making decisions about treatment, but Hurley has participated in studies on such software and says that it is far more accurate than any human could ever be.

The history of diabetes treatment is also pretty interesting. The "tight control" era is a fairly recent phenomenon, made possible by the small miracle we call a glucose monitor. Insulin, on the other hand, has been around for nearly a century — although not nearly as effective or as precise as it is now.

I highly recommend Diabetes Rising for any diabetic, anyone who has diabetes in the family, or — heck — anyone who knows a diabetic. It is fascinating stuff, written in a fairly brief but engaging format — an easy, interesting read for anyone who is invested in the subject.
Posted by Katharine Swan at 6:08 PM No comments:

In my last post, on Colorado's new health insurance program, I mentioned that I didn't know how the new program differed from CoverColorado, a state program already in existence to provide health insurance for people with pre-existing conditions.

I have my answer now, thanks to this article:

The difference is that people in the new program won't be paying any more than normal, healthy people would pay for health insurance. CoverColorado, on the other hand, charges people about 130 percent of what a healthy person would pay.

Another way the new program differs is that people have to have gone without health insurance for at least six months in order to qualify. That eliminates all of the people in the CoverColorado program. Essentially, what this new program does is target the people who couldn't afford to pay higher than market rates for health insurance — even CoverColorado rates.
Posted by Katharine Swan at 11:40 AM No comments:

Today is a big day in Colorado. Today our state launches a website to help Colorado residents get health insurance until certain provisions in the health reform bill go into effect.

New Colorado health plan to cover those with pre-existing conditions

The program seems to be based on a state program that already existed: CoverColorado, which allowed people with pre-existing conditions to buy health insurance. I'm not sure how the new program differs.

The state program, a collaboration with Rocky Mountain Health Plans and the state's high-risk insurance pool, CoverColorado, will offer coverage to people who have been uninsured for at least six months and have been denied coverage because of a medical condition.

Colorado officials are keeping many details quiet until Tuesday, but the U.S. Department of Health and Human Services said monthly premiums for the Colorado program will cost from $120 to $551 with a $2,500 deductible.

Interestingly, when I looked into CoverColorado in early 2005, there was no requirements about how long you'd been uninsured. Also, I believe the monthly premium for me — with my type 1 diabetes — fell within that range. The only thing I seem to remember is that I would have received a discount, since I made under a certain amount. But it was still several hundred dollars a month.

The actual deadline for individual states to implement this type of program was last Thursday, but apparently Colorado is still ahead of many other states. I suspect that having a similar program already in place made it easier to meet the requirements.

The health care bill's regulations prohibiting companies from denying people with pre-existing conditions won't go into effect until 2014, so the state programs are supposed to help people out in the interim. Hopefully, for the sake of people with diabetes and other pre-existing conditions, the rest of the states will get their acts together soon.
Posted by Katharine Swan at 5:24 PM No comments:

Advances made in diabetes treatment

I haven't blogged in a while, and I have more to talk about, but I wanted to start with two articles I found, announcing advancements in diabetes treatment.

The article states this pretty clearly, so I don't understand why they've made this statement:

"If the clinical trial for a vaccine called Diamyd is successful, diabetes patients may never need another insulin injection."

If all the vaccine does is stop the autoimmune response from destroying any more islet cells, how is it going to change how much insulin kids currently need to take? If they are already taking insulin, that isn't going to change. Duh.

It's exciting to be able to prevent the autoimmune response, but hey, let's recognize this for what it is. It's not a cure for people who are already taking insulin — it's preventative for kids and people in the early stages so that they don't have to eventually take insulin.

Progress made on artificial pancreas for diabetic patients

This article suggests a discussion that I've been wanting to have after reading Diabetes Rising, so I'll save some of my thoughts on this for later. As a quick preview, though, in the book the author talks about a study he did to try out an artificial pancreas — a computer-driven system that tested blood sugar and delivered insulin every 15 minutes, more like a health pancreas would do. It effectively prevented any highs and lows in blood sugar, but at the time, the FDA wasn't allowing a computer to make decisions about how much insulin a person should be taking. This article predicts that in a few years, the technology will be made available to the public. I sure hope so!
Posted by Katharine Swan at 9:29 AM No comments:

Katharine Swan
I am a freelance writer with over a decade of professional writing experience. In addition to maintaining my many blogs, I write marketing copy, web content, articles, and magazine features. I am also currently working on several longer-length projects, such as nonfiction ebooks and a book series.